Since the banks have been in the news lately, I thought I do a brief write-up on the banking environment with a focus on ANZ. Reason being I recently sold my interest in ANZ after holding for more than 8 years and would like to document my decision making so that I can look back to see whether I made the right decision.

Australians have a love hate relationship with our banks. On one hand, we hate them because of their unscrupulous practices driven by a culture of greed. On the other hand, investors love the banks for the high dividends. In my view, the Big 4’s dividends have become sacrosanct in the eyes of the investing community and this has motivated management to do funny things to maintain the dividend. For example, in 2015 the Big 4 collectively raised $18 billion to meet regulatory requirements and they did it by issuing various new securities. In that same year, they collectively paid out $22 billion of dividends. I know they issued various securities (hybrids etc) to raise the capital but I don’t think their existing shareholders were better off from having to pay the capital raising fees and risk future dilution from the potential equity conversion feature of these new securities.

In my opinion, this growth household debt can be said to be a key driver in the growth of bank valuations over the last 25 years. 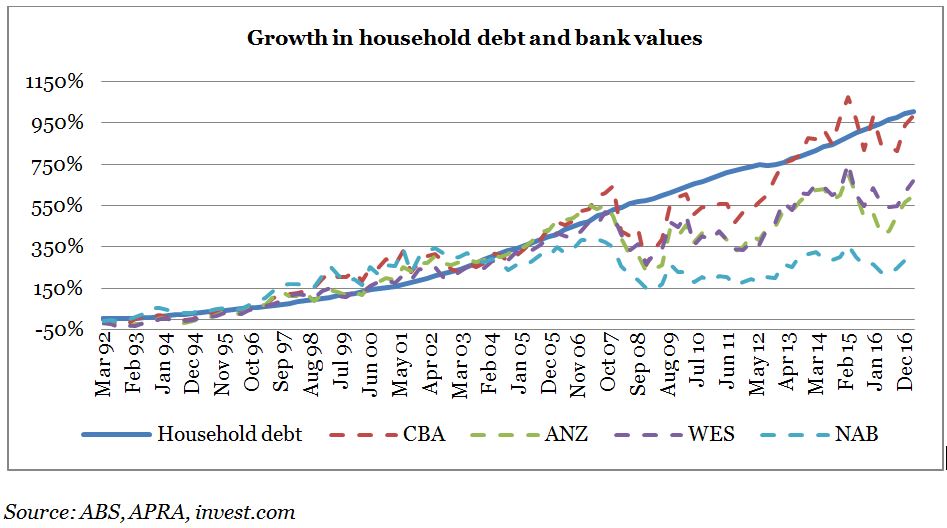 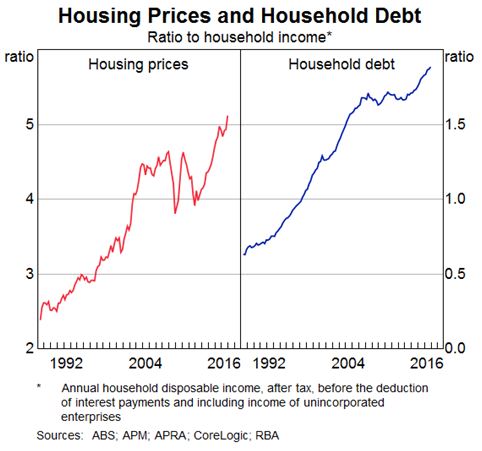 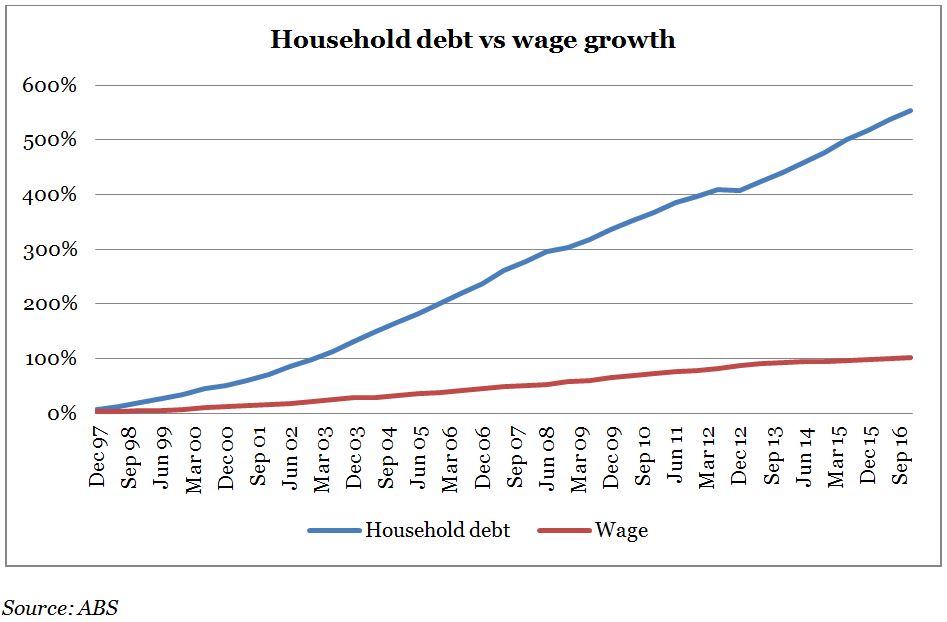 So we know that the level of household indebtedness is at all time highs but how does Australia compare to other developed countries. OECD data for 2015 show that for the household debt to disposable income ratio, Australia is fourth on the list with only Denmark and Netherlands being materially higher.

The trillion dollar question is whether the current debt level is sustainable. I don’t know, all I know if there are external shocks to the system, the outcome could get pretty ugly. Some analyst have linked the high levels of household debt to the current weak consumer spending as a sign of debt stress.

House price and mortage, positive feedback
A few years ago, UBS ranked Australians as the richest citizens in the world on a per capita basis. Other than a strong dollar at the time, the key reason can be seen in the chart below on housing values; this chart is interesting as it shows the growth of house prices in constant dollars. 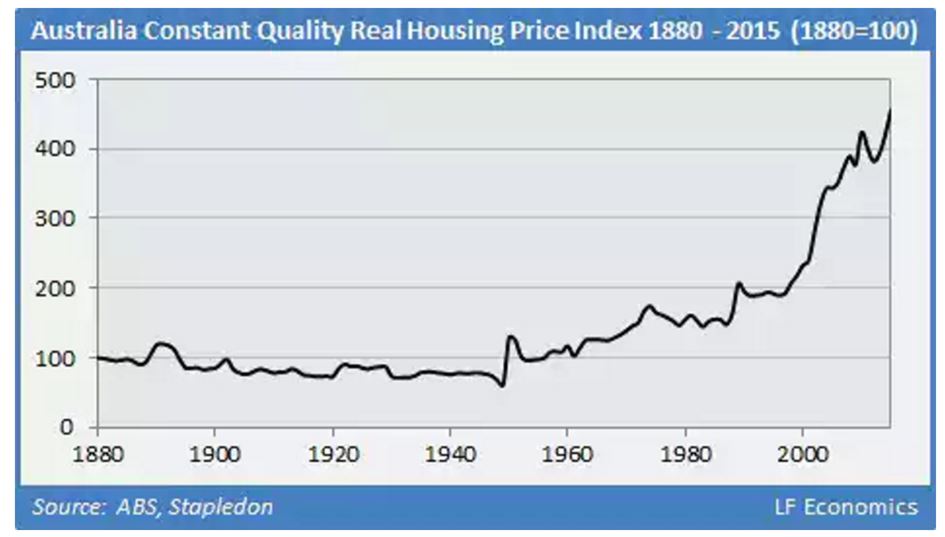 The sharp rise in housing prices coincided with the growth in household debt. I would argue that there is positive feedback loop between mortgage levels and asset values. Although some argue that the high debt levels can be sustained because of higher assets prices, I think that is a flawed argument as asset prices rise and fall but debt value remains constant.

Will house prices fall? This question is above my pay grade. The standard answer is that prices are driven by demand and supply and we know that Australia is experiencing strong population growth. However, in NSW and to a lesser extent Victoria, there has been strong new housing supply responding to the price signal. In NSW, one of the reasons for the increasing house price is insufficient housing supply. From the chart below, you can see that new housing supply hit a low in the last quarter of 2009; since then however there has been a significant increase in new housing starts. In theory the new supply should have a dampening effect on house prices. 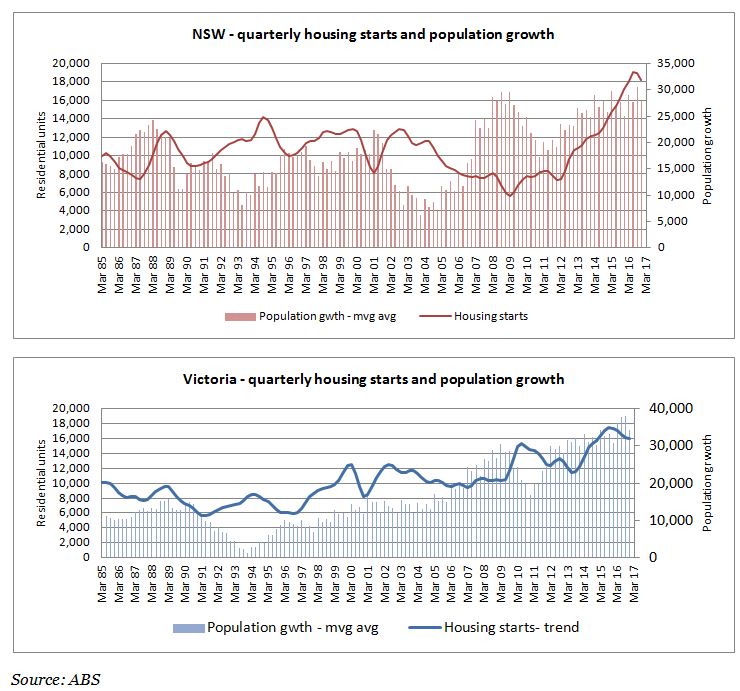 ANZ exposure to housing and credit impairment provisions
As at Sept 2016, ANZ’s housing related loans (mortgages) were $323.1 billion or 55% of the entire loan book.  Based on APRA’s banking statistics, ANZ has about 19% share of the total housing loans of the Big 4.

ANZ’s credit impairment charge for FY2016 was $1.9 billion or 0.33% of loans totalling $580 billion (its total provision for loan loss is $4.2 billion). This is more or less in line with its median historical loss rates (below). However, its historical loss rate experience was based in an environment where household debt levels were much lower. 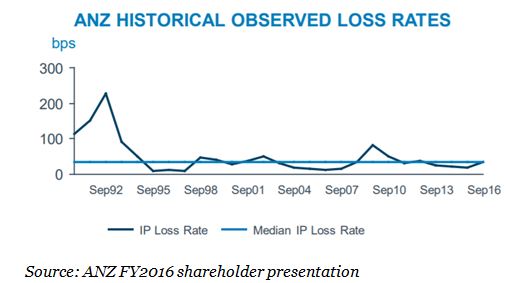 Maybe I’m old school but I would preferred that the ratio of credit impairment charge to loan book creep upwards as the loan book expanded. In my view, it’s way better than provisioning a low amount and then taking it all in one hit when a downturn comes along. And if the provision was overly conservative, one can always reverse it later down the track.

ANZ’s market valuation
ANZ’s market capitalisation at the time of writing is circa $95 billion. Its valuation ratios are as follows:

On face value, these valuation ratios don’t look stretched by any measure and are in-line with historical averages. However, I would argue that the market is not pricing in the heightened level of debt risk in the economy. The other head winds are lower growth environment given the weaker ability of households to take on more debt plus regulators leaning on the banks with additional capital requirements.

Why is the market ignoring these risks? I don’t have a firm answer but I suspect its got something to do with the low interest rate environment and investors reaching for the dividend yield.

For this reason, I’ve sold all my ANZ shares.

I’m not predicting a crash or anything like that, all I’m saying is that I think there are better risk adjusted returns to be made elsewhere.

2 replies on “Banking environment and ANZ”

Great summary of the current credit and housing situation.
Nice graphs demostrating the supply response to the pop growth. Confirms the major reason behind house prices is debt fuelled asset price appreciation. Fundamentals like what people earn diverged a very long time ago.

Apart from the bad loan provisioning from an unemployment event, you would also get massive revaluation of the actual book value itself to the downside. The book value would been written down significantly when the music stops.
Interesting that you didn’t outright call it a bubble, yet provided all the evidence to prove the existence of one.
Best case scenario is years of stagnation on the East coast so wages can catch up. Is that likely to happen given the herd mentality? When the BBQ chats start to turn to cashing out from buying up it could be a multiyear bloodbath.
Lets hope for the country’s sake it is an orderly 20% decline over several years, and not a black swan event.

Hi Joe, thanks for your comments. I only analysed the housing market due to the banks high exposure to this asset class. I think to invest in one of the Big 4, you have to be comfortable with their exposure which I clearly am not. I think the housing prices are very inflated in NSW and VIC but the problem is it’s very hard to tell when things will turn. I suspect the trigger will come from an external event and I agree with your best case scenario but unfortunately the history of market downturns suggest a high probability of overshooting on the downside, which will not be good.