I bought some preference shares a few weeks ago.

Hybrids are by default undesirable to me given they don’t have the security of debt holders nor the control of equity holders. In addition, they tend to have debt like upside coupled with equity like downside.

Ben Graham said it best in his classic book The Intelligent Investors back in 1949:

“Really good preferred securities can and do exist, but they are good in spite of their investment form, which is an inherently bad one, the preferred holder lacks both the legal claims of the bondholder and the profit possibilities of the common shareholder”

But he goes on to say when to buy preference shares:

“Experience teaches that the time to buy preferred stock is when their price is unduly depressed by temporary adversity, in other words, they should be bought on a bargain basis or not at all”

Narrow road capital has a good article on hybrids in Australia.

In my opinion TELYS4 (ASX:SVWPA), a preference share issued by Seven Group Holdings (SGH) fits Ben Graham’s above criteria for investing at its current price. TELYS4 is a non-cumulative, redeemable and convertible preference share whose key terms are:

The key reasons I’ve invested are:

SGH is a holding company. Its key assets are Westrac Group, Seven West Media, Coates Hire and Beach Energy. Given the deterioration in mining and traditional media, its debt servicing ratios have deteriorated over the past 5 years:

Although these ratios have deteriorated, its financial position is still relatively strong as the value of its portfolio assets alone can cover its borrowings.

Note: I have assigned a nil value for Coates Hire to be conservative
Source: FY2016 annual report

As shown above, the value of its portfolio assets alone exceeds the group debt.

The value of wholly owned businesses such as Westrac Group, Alllightsykes and SGH Energy has not been included in the above analysis. To give a sense of the size of these Westrac, its EBIT for FY2016 was $165.3 million.

Throughout the downturn, Seven Group Holdings have maintained dividends at $0.40 per share (FY2016 – $115 million) and bought back 14.9 million ordinary shares ($72 million) with the buyback program extended to purchase a further 16.6 million shares.

Based on the above, I believe that there is a low risk of SGH defaulting on its debt obligations.

The attraction for an investment in preference shares is generally the higher dividends compared to term deposits. Typically, the company has discretion over the payments of dividends and TELYS4 is no different.

Seven Group Holdings have maintained the dividend (ordinary and preference shares), initiated a buyback and managed to keep a relatively strong financial position despite the downturn in mining and traditional media which gives me confidence that the dividends should continue unabated. Management has strong incentive to not allow the dividend stopper to kick-in (which would cause the ordinary shares to tank) given the major shareholder has 40.5% interest in SGH.

Buyback of the preference shares

I am actually late to the game with this trade. TELYS4 was trading in the mid $50s to $60s prior to the buyback announcement.  Upon announcement of the buyback of 10% of TELYS4 shares, the price shot back up to above $70.

This is a pretty smart move from SGH as shareholders get an immediate return on capital. In my opinion it should also set a floor price for the trading of the TELSY4 shares.

At the current price the current running pre-tax yield is around 8.7% ($6.25/$72). The cash rate is at a historic low so if I were a betting man, I would bet on a rate rise as opposed to a rate cut. A rising US interest rate trajectory will alleviate pressure on the RBA to cut rates in trying to guide the Australian dollar lower. Therefore, I think the probability of this yield increasing is greater than the probability of it falling.

The dividend payment is based on the 180 day BBSW rate plus a margin of 4.75%. This is expensive debt for SGH. To illustrate how expensive this debt is, I’ve graphed the corporate bond spreads (BBB rated debt) over the past 10 years. Spreads between bond yields and government debt isn’t completely identical to the above margin but still provides a good comparison. 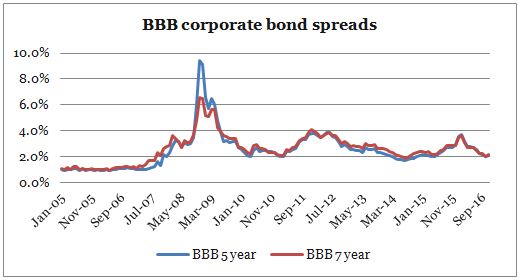 As seen above, spreads were sitting around the 1% mark prior to the GFC and are currently at 2%. As this spread gets lower and as SGH financial position improves, there will be greater incentive for SGH to redeem the preference share and replaced it with cheaper debt.

To give a sense of the annual return in the event a redemption occurs in the near future, I have performed an analysis assuming redemption in 3, 4 and 5 years. My analysis assumes that the 180 day BBSW rate stays at 1.5% which is very conservative.

Even if redemption does not materialise, there is still a likely chance that the share price will increase in tandem with a recovery in SGH’s ordinary share and the overall mining sector. Prior to mid-2015 these preference shares were trading in the $90 – $95 range.