In my last update for Rex, I noted that I was going to hold my position till I see a trend reversal in passenger numbers.  Recently Rex had their AGM and announced a few interesting developments which I think may reverse the declining passenger numbers, amongst other things.

The important bits worth noting are:

The WA selection of Rex for the above two regulated routes is significant given the passenger traffic on these 2 routes.  To give relative traffic on these routes, the 23 Queensland routes which were awarded to Rex in total have about 38,000 annual passengers.  Perth-Albany and Perth – Eseperence have about 58,000 and 45,000 pax p.a. respectively.  Aggregate of these routes are about 10% of current passengers flown. These 2 inaugural routes may open up further opportunities in WA.

On the downside, Pel-Air’s Fast Jet contract has ceased.  Based on the information released by the AusTender, I estimated that this will result in a revenue loss of approximately $7.5 million p.a. based on disclosure from AusTender.

Based on the results in FY2015 and factoring in the above developments, I estimate that the recurring NPAT over a 12 month period is potentially $12.5 million as shown below: 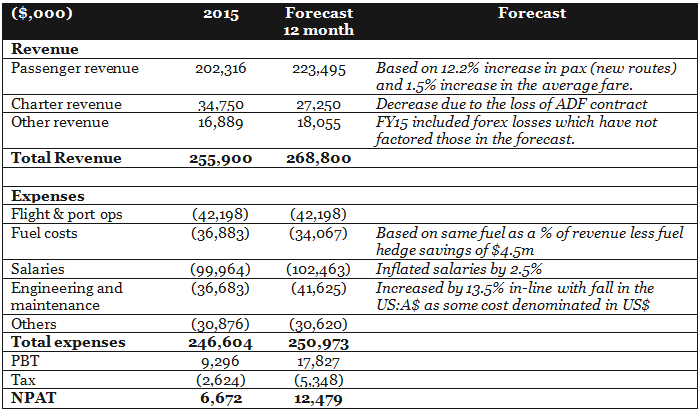 Note that this is not a forecast for FY2016 as the WA routes revenues will only commence in February so will at maximum contribute 5 months of incremental revenue in FY2016 notwithstanding the one-off set up costs for commencement of the routes.  The above analysis is really to show the potential run-rate moving forward.  Obviously things can and will change but $12.5 million is not unreasonable given Rex had achieved NPAT of $14.0 million in FY2013.

As mentioned in my previous post, cash generation is still strong as the depreciation of nearly $16 million is non-cash and the level of debt should come down substantially by the end of FY2016.  I estimate by the end of 2016 barring any major capex spend (excluding the $6.2 million for the new catering facility) the company should be debt free (cash > debt).  My view is that dividends will resume at the latest at the end of calendar 2016, triggered by either a turnaround in passenger numbers (downtrend for continuous 7 years) or when company becomes debt free.

The continuation of dividends would be a catalyst for the stock to move higher.  I’ll wait for the half year results to see how passenger numbers are tracking before changing my stand on Rex.