I thought I write a bit about floating rate notes (FRN) as when the price is right, it can be a good investment for those who need a steady income.

So what are floating rate notes? According to Wikipedia:

“Floating rate notes (FRNs) are bonds that have a variable coupon, equal to a money market reference rate, like LIBOR or federal funds rate, plus a quoted spread (a.k.a. quoted margin). The spread is a rate that remains constant. Almost all FRNs have quarterly coupons, i.e. they pay out interest every three months. At the beginning of each coupon period, the coupon is calculated by taking the fixing of the reference rate for that day and adding the spread. A typical coupon would look like 3 months USD LIBOR +0.20%.”

In the Australian context, LIBOR is replaced by the bank bill swap rate (typically 90 day BBSW).  FRNs are rank below senior debt (subordinated), unsecured with the typical face value being $100.  As these securities pay floating rates, they have less inherent interest rate risk as compared to a fixed coupon debt instrument and are traded on the ASX.

The following table shows the key terms of some of the FRNs traded on the ASX.

Note: The margin on the Crown’s subordinated notes II is actually 4.00%.

Currently, the three FRNs which are trading below par are Crown Notes I & II and Origin Notes.  The closing prices today were $99.4, $90.2 and $94.7 respectively.

Risks
Given that these are debt securities, the key risks are as follows:

Crown and Origin are both going through somewhat difficult times.  MelcoCrown, an associate company of Crown is experiencing a significant slowdown in its casinos in China whereas Origin is suffering from depressed oil and LNG prices.  Shares of Crown and Origin over a 12 month period have fallen by 29% and 59% respectively.

The current S&P credit rating for Crown is BBB (stable) and for Origin credit rating was downgraded to BBB- in April 2015 and reaffirmed by S&P today.  The solvency ratios over the past 5 years for Crown and Origin are as follows:

The interest cover and leverage ratios are disclosed by the issuers and I have calculated the debt to capital ratios.  Although the leverage ratio after 2012 has not been disclosed by Origin, the debt to capital ratio has risen significantly over the last 5 years.  One of the reasons for the increase in debt is the development of the Australia Pacific LNG project which is budgeted to cost $25 billion with Origin having a 37.5% stake.

Although not disclosed, I’ve calculated Origin’s FY2015 leverage ratio to be 5.6x (total debt of $11.9 billion and underlying total debt EBITDA $2.1 billion [includes $400 mil from discontinued operations]) which is above the leverage ratio threshold for mandatory interest deferment.  Origin’s debt maturity profile is as follows: 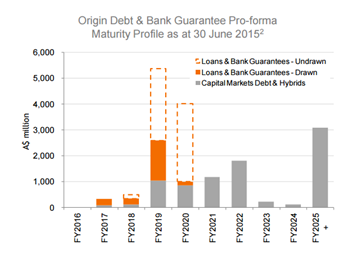 In addition to its announcement today to raise $2.5 billion rights offer, Origin has announced a few initiatives including cost savings, asset sales and dividend reduction plans.  In FY2016 Origin is expecting to raise $4.1 billion from the above rights offer and sale of the contract energy division. However On the other side, it is also expecting capex of approximately $2.5 billion in FY2016.

Standard & Poor today reaffirmed Origin credit rating of BBB- (stable) which is a good sign and given it has no loans maturing in 2016, it is possible that the proceeds from this rights offer will be used to settle the FRN ($900 million) on its first call date in Dec 2016.  There will be an incentive to settle this at the first call date as the ratings agencies have allowed the 50% of the FRN to be treated as equity (equity credit) for credit rating purposes for the first 5 years only.  The end of the 5 year period coincides with the first call date.

As for Crown, it is currently in a better financial position as compared to Origin but from a capex cycle perspective they are at opposite ends.  Crown is about to start a capex spending spree on new casinos whilst Origin is coming to an end of its capex cycle.  Some analyst have estimated that Crown will need to spend north of $3 billion on new projects (Crown Sydney >$1 billion) over the next 4 years.  The majority of Crown’s earnings are from its Australian assets and normalised net profit after tax (NPAT) is in excess of $500 million in FY2015 whilst net debt is $2.2 billion.  Interest cover and leverage ratios are strong and Crown will have options available to them when it comes to funding the capex. 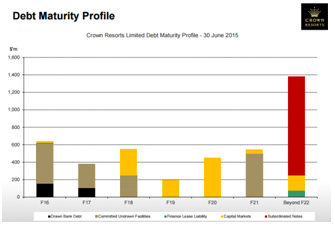 In assessing the yield or rate of return for the above notes, I have assumed the following:

My valuations results are as follows (workings attached below):

Based on the above results, compared to Crown, I would rather invest in GJT whereby I would get a somewhat similar dividend yield plus potential for capital gain.  In my opinion, the risk reward ratio is more favourable for an investment in GJT.

However, with the rights issue and recent confirmation by S&P on its investment grade ratings, the Origin notes look interesting at a yield of 11.4%.  This assumes maturity in December 2016 and there is a risk of Origin not calling the notes at the first call date.  Hard call this one but worth a closer look.

The yield to maturity workings are as follows: